A Unix programmer heads over to the local diner to get something to eat for lunch. He, or Bob as he prefers, knows better than to manually scan the entire menu with his eyeballs because it’s inefficient. Bob knows that there’s a better way to automate the process in searching for what he wants to eat.

Last time he was here he had a pretty good pasta-and-shrimp plate for under 10 bucks.

Bob wonder’s if this same dish is still available. He pops open his laptop running Linux and scrapes the restaurant website menu table into a plain text file.

Now that Bob has the menu, he does a grep search for the pasta-and-shrimp plate:

So far so good. He filters for the price column by using awk and the NF variable (which is the number of columns fields available) in order to get the last column containing the prices:

The starvation is kicking in and he’s typing furiously by now. Bob proceeds with sed to turn the dollar amount into an integer by replacing everything except for what’s inbetween the dollar symbol and decimal period. He’ll use a capturing group and replace the contents with the first capture group \1:

Finally, using the handy test command and the less-than flag -lt, Bob can check whether the price is less than 10 with the help of xargs to pipe the value as the first argument to test:

But wait there’s no output! Actually, test returns an exit status code of 0 if the condition passes or 1 if no match.

Bob simply echo’s Available if the previous command was successful by using &&, otherwise he’ll echo 🙁 by using the double pipe || if it was not successful:

Voila! there it is, the desired pasta-and-shrimp plate is still the under ten bucks. Bob is happy and proceeds to order his favorite dish.

(hope you liked this intro post to unix pipes and bash commands!)

Securing Linux server is very important to protect your data, intellectual property from the hands of crackers (hackers). The system administrator is responsible for security of the Linux box. In this blog we will go through important tips for hardening a Linux server.

Note: In this blog we are targeting specifically CentOS & RHEL Linux Operating system but same concept can be applied to other Linux/Unix flavors as well.

Place the installation to a common area (/opt).

make a common link to the eclipse program to /usr/local/bin/eclipse.

Test running eclipse from the commandline.. Type this without a path:

If it doesn’t work the exec program might be at:

Fix this by removing the previous link and linking the exec with:

When you can bring up Eclipse from the commandline, you can make a desktop entry by creating a desktop program with.

copy and paste this into the editor then save it:

Now eclipse should appear in your Ubuntu Launcher search button.

END_OF_DOCUMENT_TOKEN_TO_BE_REPLACED

The Little Book of Python Anti-Patterns

Welcome, fellow Pythoneer! This is a small book of Python anti-patterns and worst practices.

I’m happy to tell you that in WordPress 4.7, developers can register their own bulk actions on list table screens. 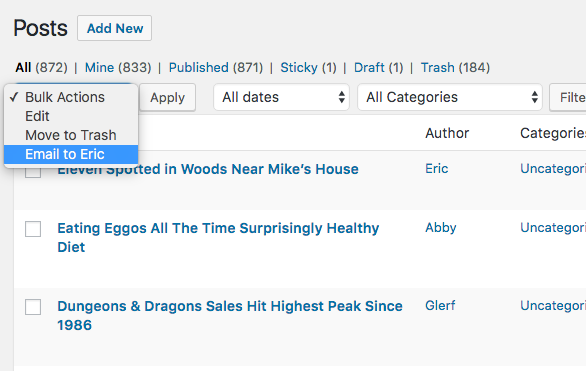 Let’s walk through the steps required to add one.

An option in the dropdown

To add an option in the Bulk Actions dropdown HTML element, register a callback on the bulk_actions-{screen_id} filter that adds the new option onto the array. Replace {screen_id} with the ID of the admin screen to offer the bulk action on.

To add a bulk action “Email to Eric,” we could use the following code:

To handle a bulk action form submission, register a callback on the handle_bulk_actions-{screen_id} filter for the corresponding screen. The filter expects the redirect URL to be modified, so be sure to modify the passed $redirect_url. This allows us to carry success or failure state into the next request to display a notice to the user. The other callback arguments will differ depending on the screen here to include contextually relevant data.

To add a bulk action handler for emailing the selected posts, we could use the following code:

We could use the existing notice hooks to let the user know what happened, depending on the state we set in the URL:

For the curious, see the related changeset and Trac ticket.

Whether you need an antivirus or anti-malware scanner or a tool to hunt for rootkits, Linux has you covered.
Used with permission

Wait, Linux needs antivirus and anti-malware solutions? I thought it was immune to such things. Perhaps a bit of clarification is necessary here.

First and foremost, no operating system is 100 percent immune to attack. Whether a machine is online or offline, it can fall victim to malicious code. Although Linux is less prone to such attacks than, say, Windows, there is no absolute when it comes to security. I have witnessed, first hand, Linux servers hit by rootkits that were so nasty, the only solution was to reinstall and hope the data backup was current. I’ve been a victim of a (very brief) hacker getting onto my desktop, because I accidentally left desktop sharing running (that was certainly an eye opener). The lesson? Even Linux can be vulnerable.

So why does Linux need tools to prevent viruses, malware, and rootkits? It should be obvious why every server needs protection from rootkits — because once you are hit with a rootkit, all bets are off as to whether you can recover without reinstalling the platform. It’s antivirus and anti-malware where admins start getting a bit confused.

Let me put it simply — if your server (or desktop for that matter) makes use of Samba or sshfs (or any other sharing means), those files will be opened by users running operating systems that are vulnerable. Do you really want to take the chance that your Samba share directory could be dishing out files that contain malicious code? If that should happen, your job becomes exponentially more difficult. Similarly, if that Linux machine performs as a mail server, you would be remiss to not include AV scanning (lest your users be forwarding malicious mail).

With all of that said, what are your options? Let’s take a look at a few tools, offered for the Linux platform, that do a good job of protecting you (and your users) from viruses, malware, and rootkits.

Without a doubt, ClamAV is the most popular option for keeping viruses off of your Linux machines and out of your shared directories. There are a few reasons why ClamAV is so popular among the Linux crowd. First, it’s open source, which in and of itself is a big win. Second, it’s very effective in finding trojans, viruses, malware, and other threats. ClamAV features a multi-threaded scanner daemon that is perfectly suited for mail servers and on-demand scanning.

ClamAV can be run from command line or it with the ClamTK GUI. Both tools are easy to use and very dependable. Installing ClamAV is simple.

If you’re running a Debian-based desktop, you can install ClamTK (the GUI) with the command:

There are also third-party tools that can be added (to include support for the likes of MTA, POP3, Web & FTP, Filesys, MUA, Bindings, and more).

Upon installation, the first thing you’ll want to do is update the signatures with the command sudo freshclam. Once that completes, you can scan a directory with the command:

where DIRECTORY is the location to scan. The -r option means to recursively scan and the -i options means to only print out infected files. If you work with the GUI, it’s even easier. From the GUI you can run a scan and, should ClamAV find anything, act on it (Figure 1).

Figure 1: ClamAV found a file with possible malicious code.
Used with permission
The one caveat to ClamAV is that it does not include real-time scanning. In fact, if you’re not using the ClamTK GUI, then to create a scheduled scan, you must make use of crontab. With the ClamTK GUI, you can only set up a schedule for your user home directory.

Explanation of the used arguments in this example:

END_OF_DOCUMENT_TOKEN_TO_BE_REPLACED

Here are the different types of the JOINs in SQL: